Did you watch the Royal row on TV yesterday? We did, because we know some people who participated. The rowing club we are members of had two boats in the pageant. Our little princess summed up the event quite well – “many boats”.

The Swedish commentators made some intresting observations. Things like “to reign for 60 years you have to be blessed with a long life”. If Prince Charles had heard that he might have wanted to add that you also need to be “blessed” with a parent who die in your twenties. I have a feeling that Charles might have mixed feelings about his mothers longevity.

I thought they focused a bit much on that big boat at the front. There were ordinary people out there as well. Lovely ordinary people. Who cares about the royals when John Comer and his posse are also on the river?!

As you probably didn’t spot them I have shamelessly nicked a photo off Emma’s facebook wall for you. 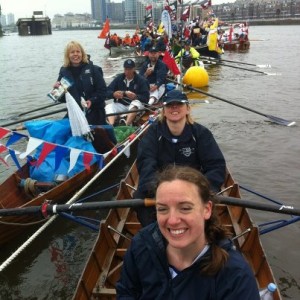